Why Rep. Chris Smith (R-NJ) is right on Ethiopia, while Senator Mendendez & Booker are wrong for simpitizing with known terrorists!

Although Ethiopia is 7,075 miles away from New Jersey, recent events unfolding in the country should not only be a concern for the East African nation and its regional neighbors but should also matter to people in the U.S. as taxpayer dollars are being lobbied for yet another military intervention against a democratically elected government.

The Ethiopian government has been at war with the rebel group Tigrayan People’s Liberation Front (TPLF) for the past year, after TPLF’s brutal authoritarian reign ended in 2018 as a result of massive uprisings. The relationships the rebel group amassed during its time in power is evident as it’s able to gain support from the current Biden administration. However, in light of recent events, it just might be a good time for Biden and key democratic leadership  to distance themselves from this ruthless rebel group, as unspeakable stories of mass execution of civilians, rape, and utter property destruction (including of hospitals, churches and mosque) are coming out of towns they have been recently pushed out of. The suspicion that the U.S. was supporting the coup attempt against the government of Ethiopia, gained credibility when the spokesperson of the rebel group, Getachew Reda, stated in a recent interview US wanted the rebels “to enter Addis Ababa (the capital of Ethiopia)”. And in a classic Joe Biden’s phrase, “this is a big f****** deal!” 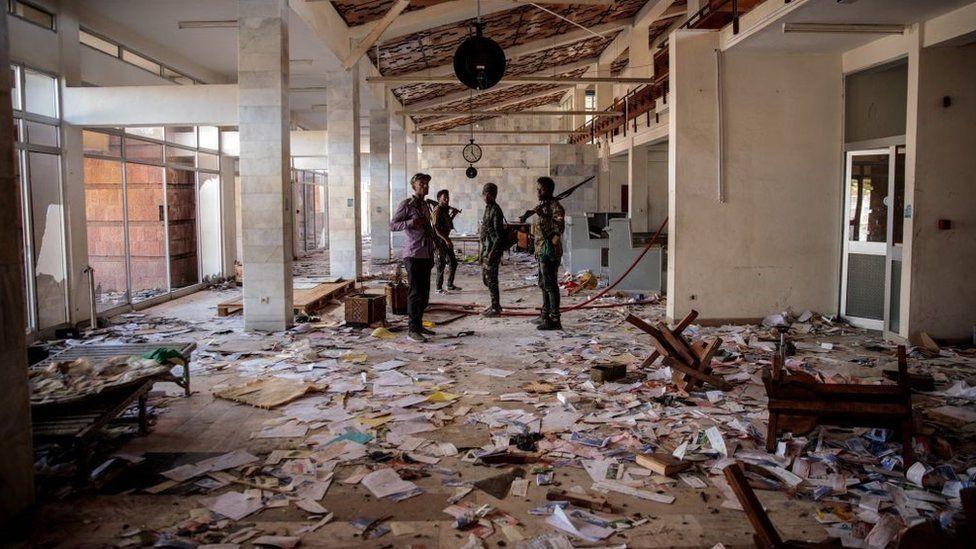 The airport in Lalibela, a popular tourist site, was ransacked by TPLF [AFP]

TPLF’s move toward returning back to power began on November 4th 2020 as it attempted to create regional instability by first attacking a military compound and later firing rockets indiscriminately into neighboring Eritrea, an act which prompted then US Secretary of State Mike Pompeo to blast the group for initiating the conflict and praised Eritrea for showing restraint.

You can find similar condemnation of the terror group in a recent video posted by Rep. Chris Smith (R-NJ), who also criticizes the US State Department for an uneven response in the conflict. The assessment from Rep. Smith shows the need to understand the facts on the ground before jumping into conclusion. This is a stark contrast to Sen. Bob Menendez and Sen. Booker, who have called for mounting pressure on the government of Ethiopia including crippling sanctions that aim to crush hundreds of thousands workers in mainly small-scale manufacturing.

Responding to the conflict, senator Bob Menendez goes even furter and unequivocally claims genocide is occuring in Tigray on a recent NPR interview. The claim of genocide was debunked by a UN human rights reports where it found war crimes have been commiteed on all sides. As Chairman of the Senate Foreign Relations Committee, we should expect better from Sen. Menedez, we should expect the same standard and thought process as Rep. Chris Smith displayed prior to taking action on a bill that can devastate a growing democracy and hundreds of thousands families that rely on the small business that will be impacted most.

In light of the UN report and recent events coming out of Ethiopia, it is critical to pause and assess the facts on the ground using independent credible investigations. Why is the Chairman of the Senate Foreign Relations Committee, who is advancing a bill calling for sanctions against Ethiopia & Eritrea not calling for sanctions against the group who initiated the conflict? How much influence does Assistant Secretary of State for African Affairs Susan Rice, (who had a close relationship with the founder of TPLF), have on the current policy being drafted by the state department?

Despite the flood of misinformation and high profile lobbyists coupled with TPLF’s connection working to remove the Ethiopian government, the people are fighting back. Independent voices are rising and calling attention to what is unfolding in Ethiopia. And this time, people across the globe are paying attention and making their voices heard. The #NoMore Pan-African movement is gaining momentum and is reminiscent of when fascist aggression in Ethiopia sparked a movement of black solidarity and African-Americans in Harlem were volunteering to enlist in Ethiopia’s army to fight Musollini. How dare you Sen. Menendez? How dare you Sen. Booker? How dare you speak up against a failed insurgency that occurred in Washington DC, while siding with aggressors of an insurgent group and putting pressure on a democratically elected government. Ethiopia’s experiment toward democracy will not stop, the people in and outside the country know what is at stake.

Seeking truth and supporting a growing democracy should matter, or at the very least, Biden and his team should pay attention to the recent gubernatorial election in Virginia, in which Ethiopian & Eritrean-Americans came out in droves to help deliver a win for Youngkin. This should especially be a concern in upcoming midterm elections and in swing states like Georgia where there is a large Ethiopian and Eritrean-American population. What can you do now? Call Senator Menendez and Senator Booker and tell them #NoMore deployment of U.S. servicemen in yet another region under a false pretense. Tell them #NoMore use of our tax dollars on unjust wars. Tell them you don’t support the bill dubbed the ‘Ethiopia Peace and Democracy Promotion Act of 2021. Tell them no more attempt at at regime change, no more,no more,n #NoMore!

Op-Ed originally ran on Trenton Journal.
Berhan Berhanu is an Ethiopian native and a New Jersey resident who volunteers with Ethiopiainfo.org